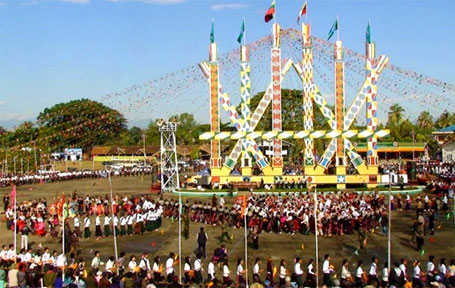 Manaw Festival is usually held in Kachin State, especially in Myitkyina and Putao, and is held every year in January to welcome the New Year. Artistically designed Manaw poles are erected at the centre of the festival area and Kachin people are dancing around these poles as a way to celebrate the New Year, the reunion of tribes, and the victories in battle. If you happen to visit Myanmar in January, around first or second week, then join this festival. It is a unique chance to see Kachin people in their beautiful traditional costumes, and you can even participate in the dance with them during the festival.

Tagu month is the first month in Myanmar calendar and usually falls in April. Symbolizing the cleansing of the past sins, the Thingyan Water Festival is held to celebrate the Myanmar New Year. This festival is similar to the famous Songkran Festival in Thailand wherein people throw or splash water at one another, and children enjoy with little water pistols during the four-day festival. On the Burmese New Year day, Myanmar people also do good deeds by offering free meals and snacks, taking Sabbath, or cutting nails for their elders.

Usually held in April, this festival is the most popular among Rakhine people. During the festival, you can enjoy the Rakhine traditional dances, boat rowing contest and boxing competition. It’s also an opportunity to learn more about the ancient temples and pagodas of the old Mrauk U Dynasty.

Kason Festival in May 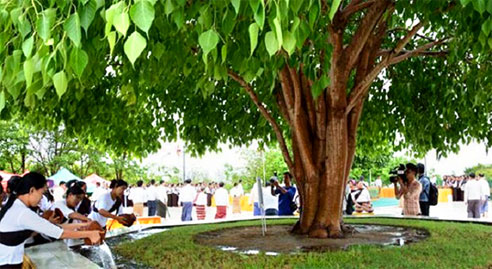 The full moon day of the lunar month of Kason sees celebrations for the birthday of Lord Buddha. The festival is celebrated nationwide to announce the auspicious birth, enlightenment and death of the Buddha. You can join the event at the Shwedagon Pagoda, or most of the pagodas in Yangon and other big cities. Here is how to participate: follow the locals and pour water over the roots of sacred Bodhi tree (Banyan tree), beneath the branches of which the Buddha attained enlightenment.

In November, the Taunggyi Tazaungdaing (also known as the Festival of Lights) is the most popular festival held in the Shan State. Various shapes and sizes of hot air balloons are launched to the sky as an offering to the heavens, and to fight off evil spirits. 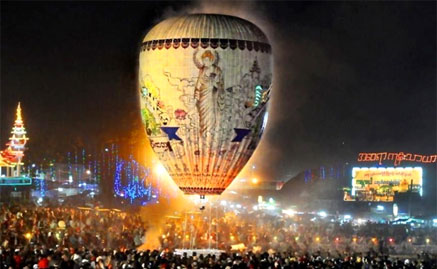 The festivals in Myanmar are not only celebrations, but they are a traditional way of giving an in-depth experience into its people’s ideology, culture, and way of life, to both foreign and local tourists. This is something you would not want to miss if you have the opportunity to visit Myanmar at the right time.​

5 Famous Local Festivals You Must Not Miss in Myanmar​

Ranging from the water festival to the festival of lights, Myanmar year is based on the Buddhist lunar calendar where the dates of festivals may vary each year. Some festivals are solemn; others are occasions for fun—all are well worth experiencing when you are in Myanmar.